The Department of the Environment (DoE) celebrates Black History Month in recognizing the hard work and dedication of some of our hometown environmental heroes! From helping fellow neighbors to volunteering in cleanups to forming organizations or taking the fight to the U.S. Environmental Protection Agency (EPA).  Read how these County advocates continue to improve the quality of life, not only for the environment but also for Prince George's County's diverse residents. 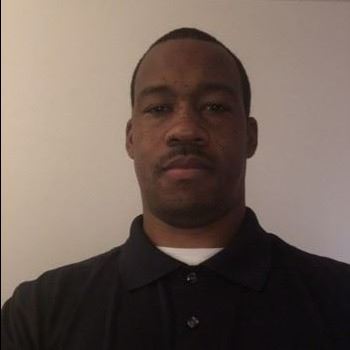 Antoine Lanier has worked for the Prince George's County Fire Department for almost 16 years and lives in the County with his fiancé and two sons. Born in Washington, D.C., he would always look out for the trash and recycling trucks coming through the alleys, which sparked his interest in the environment. Antoine has worked on many projects, such as high school creek cleanups and neighborhood cleanups. He is most proud of his ability to make a difference in his community by educating many of his neighbors regarding the proper disposal of various waste materials, mainly to prevent items from being illegally dumped or poured down the drain. Antoine feels strongly that if each person looked around their communities, they could see how they play a personal role in improving it as a whole. Acts as simple as picking up litter in neighborhoods or participating in river and creek cleanups so that our waste doesn't end up in our creeks and streams. He also believes that the support of local governments investing in programs and services is crucial and that continuing to educate residents and make information available to them will allow residents to feel a part of the process. A part of the larger community that is Prince George's.

Antoine Lanier received a Waste Diversion and Recycling Award from DoE in November 2019 for his volunteer accomplishments and for helping coach his fellow firefighters stationed in Upper Marlboro, on how to recycle right! He expresses that "we all can make a difference, one piece of litter at a time."

Kamita Gray was born and raised in Prince George's County and has deep family ties to the region. She has been an activist and community leader since the 1990s and currently runs the Brandywine/Thomas Brooke, Southern Region Neighborhood (BTB) Coalition. She operates a small business in the County and volunteers on behalf of her neighborhood and the greater good. She has led efforts to reduce environmental disparities in her community, as Brandywine gradually became a destination for various unwanted industrial uses that aren't in other parts of the County (such as power plants, coal waste dumps, gravel pits, and superfund cleanup sites). Kamita was a leader in the first-ever US/EPA civil rights complaint ever filed in the County's history seeking to change her community's fate as a preferred destination for hazardous environmental uses. This process has resulted in changes in Maryland State law affecting overburdened communities.

Kamita and her group have also partnered with the University of Maryland to conduct Health Impact assessments within the community and raise interest and awareness of environmental health problems affecting the community.  Her organization also participates in air monitoring campaigns to protect residents from airborne particulates and other health problems from diminishing air quality in the region due to traffic and industrial activity. Kamita is a role model for civically engaged residents, with grassroots ties and a deep humanitarian sense of caring about the County and its environment.  plus its social-economic future on behalf of a community suffering from too many adverse burdens and insufficient investment in its amenities for the people who live in Brandywine.

As a life-long activist, environmentalist, and conservationist, Kamita Gray is deeply invested and reverent about nature generally and the unbuilt world.

Mayor James Crudup, of the Town of Eagle Harbor, has been active in the County since the 1960's. His hard work and dedication have been illustrated by his gradual "greening" of the town by addressing longstanding environmental problems such as flooding, riverfront erosion, and raising residents' expectations for a better, more environmentally sustainable place to live.  Mayor Crudup has personally invested in environmental justice issues and is diligent in protecting the community from environmental health hazards such as coal emissions, as well as both surface and groundwater contamination issues. He has also been avid in celebrating and protecting the town's history and heritage as a freestanding, historically African-American town, with an amazing history of durability and struggle going back to its founding in the 1920s.

Under Mayor Crudup's leadership, the Town of Eagle Harbor achieved a Maryland state designation as a "Sustainable Community," which garnered state grants to repair local streams and town infrastructure, bringing in well over 1 million dollars in grants to implement his vision. He has been active in regional and national forums spreading the word and sharing his knowledge with peers and colleagues in other towns and spaces. He has participated as a panelist in the Taking Nature Black Conference in Bethesda, and the Black Communities Conference in North Carolina, which featured African American elected officials from all over struggling to find answers to various environmental and community-based challenges.

Mayor James Crudup goes above and beyond into improving his town and being an extraordinary steward of the town's modest resources to make it a premier destination in Prince George's. His environmental track record has been exemplary, and he has brought tremendous value to the town, his neighbors, and the County.

After graduating from the Duke University School of Nursing, Margaret White moved to Prince George's in 1968 and worked at D.C. General Hospital. She later transferred to Howard University Hospital, where she retired. Margaret first became interested in the environment in the 1980s, where she volunteered for an Anacostia River cleanup, removing trash and bottles from the water and riverside. She continues to participate in Anacostia River clean-ups and volunteering at Bladensburg Waterfront Park and around the County. Margaret initiated a cleanup event at Central High School, which consisted of removing dead shrubs and invasive plants, cutting tree limbs, planting flowers, mulching, and painting tables and benches for public use.  She continues to be an activist for her community, volunteering in the semi-annual cleanup event at John E. Bayne Elementary School and developing Millwood Park.

Margaret is currently involved in Walker Mill Regional Park's redeveloping, working on expanding the amenities to residents such as more recreation space, walking trails, play area, art, and responsible landscaping. She continues her education by attending workshops, such as the landscaping and planting sessions offered by the University of Maryland.

Frederick Tutman, also known as Fred, founded the Patuxent Riverkeeper in 2004 and continues to manage it today as well as being an active civic association leader. He has been an activist and community advocate in the County since the 1990s. Born and raised in Prince George's, Fred has deep family ties to the region of Queen Anne, a former river town that was fundamental in the County's formation. He was raised and still lives on an ancestral farm founded by his great grandfather. Fred is an active farmer, backpacker, kayaker, mountaineer, blacksmith, and trail maintenance worker. He attended law school at the University of the District of Columbia. He ran a small business for 25 years in the County that led him to travel the world as a photojournalist for network television clients before forming Patuxent Riverkeeper.

As a lifelong outdoor enthusiast, Fred founded the Patuxent Riverkeeper to protect the river that runs near his home and farm. He has filed numerous lawsuits against flagrant polluters and has garnered over 500 million dollars in judicial remedies used to improve, restore, and remediate river-related degradation. He routinely investigates and tries to resolve citizen pollution-related complaints and concerns. He is the only African American Waterkeeper in the nation (a global movement licensed by Waterkeeper Alliance in New York). Fred's work covers the seven Maryland counties of the Patuxent, but his home and office are based in Prince George's, where he mentors and assists local activists to actualize their own environmental goals and protect public environmental health.  Fred strongly believes in the power of grassroots work and mentoring new leaders that respect the need for people and communities to tell their own stories as it relates to nature. 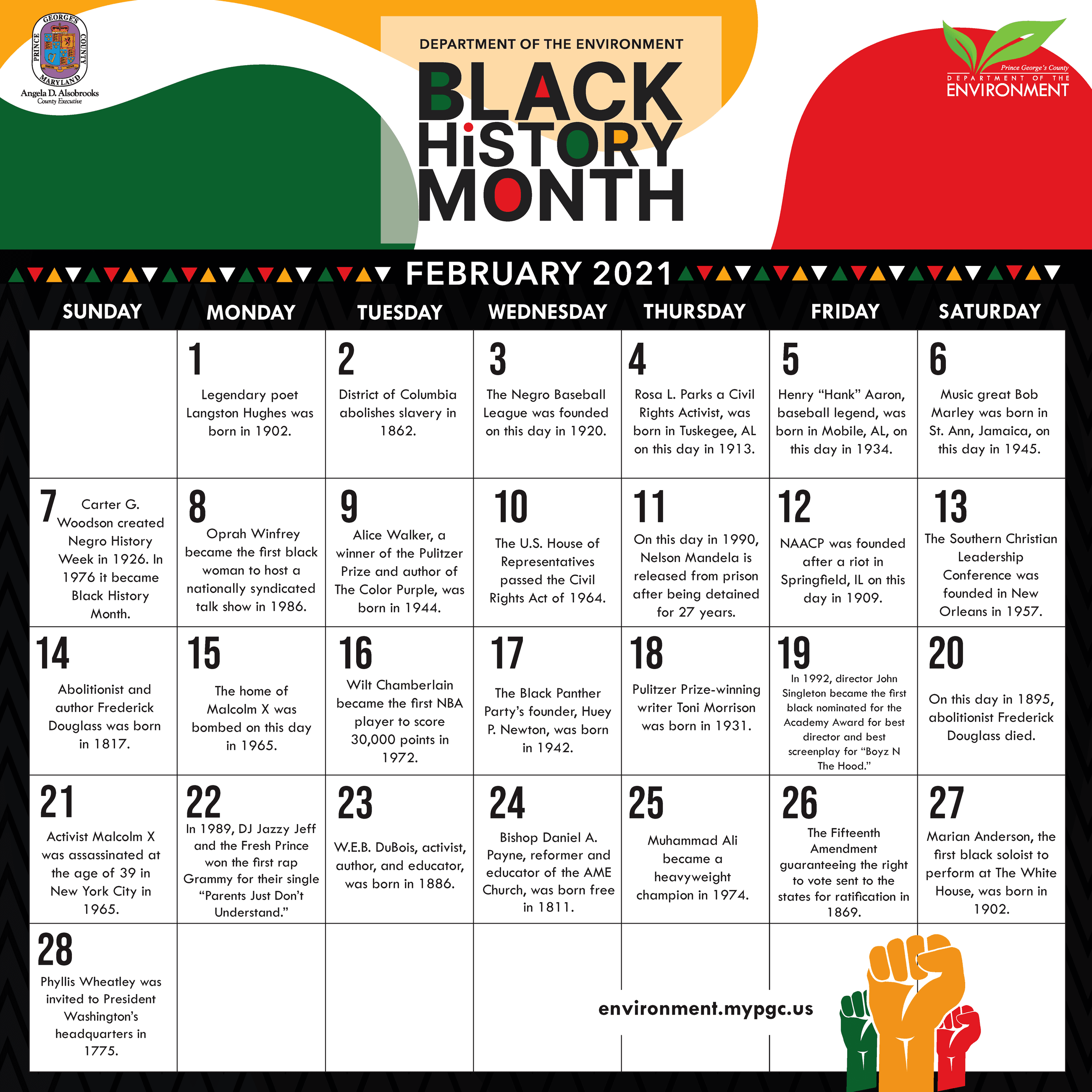 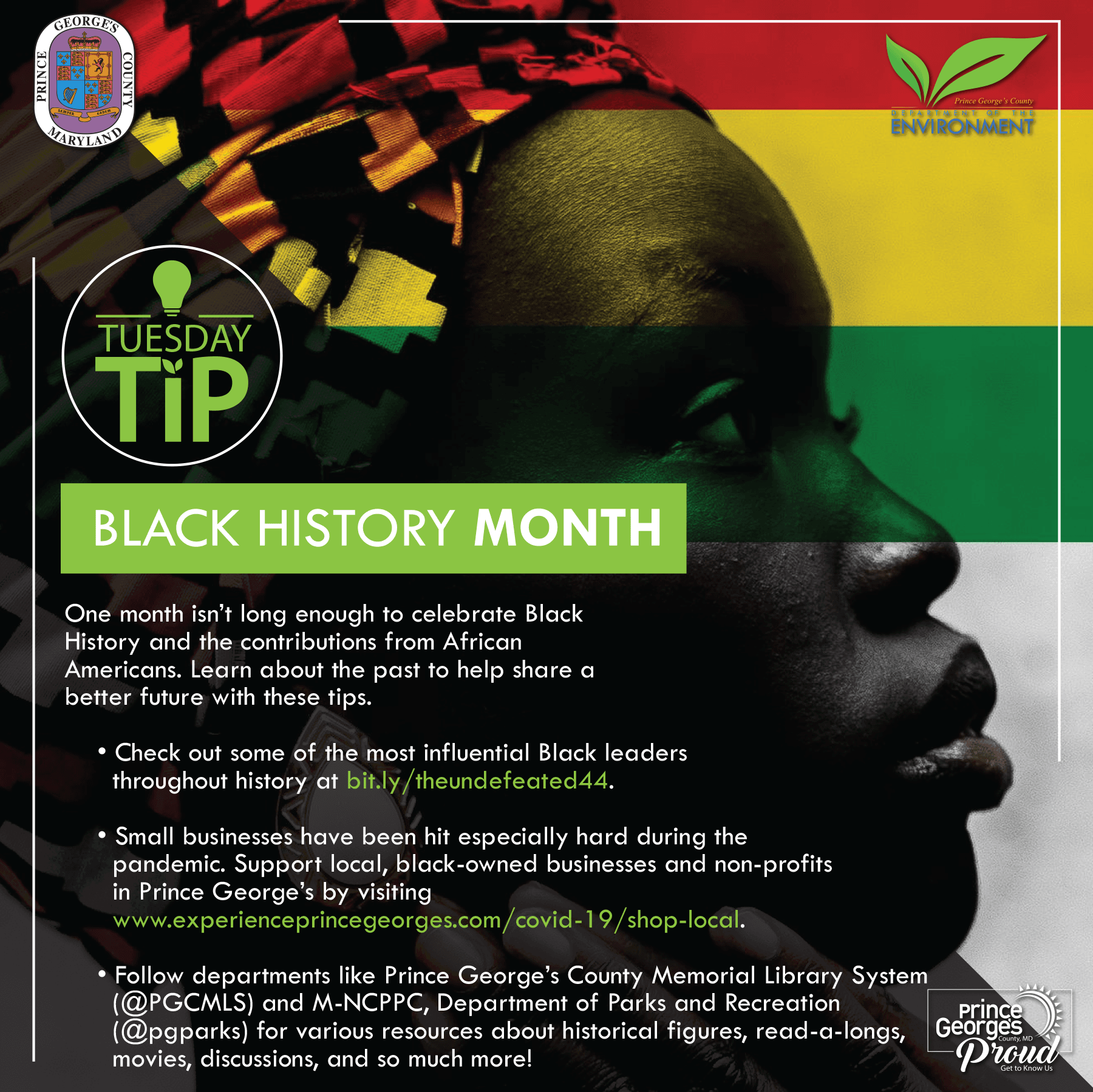 One month isn’t long enough to celebrate Black History and the contributions from African Americans. Learn about the past to help share a better future with these tips.